PyTorch typically computes gradients using backpropagation. However, certain operations require intermediary results to be saved in order to perform backpropagation. This tutorial walks through how these tensors are saved/retrieved and how you can define hooks to control the packing/unpacking process.

This tutorial assumes you are familiar with how backpropagation works in theory. If not, read this first: https://colab.research.google.com/drive/1aWNdmYt7RcHMbUk-Xz2Cv5-cGFSWPXe0#scrollTo=AHcEJ6nXUb7W

Training a model usually consumes more memory than running it for inference. Broadly speaking, one can say that it is because “PyTorch needs to save the computation graph, which is needed to call backward”, hence the additional memory usage. One goal of this tutorial is to finetune this understanding.

In fact, the graph in itself sometimes does not consume much more memory as it never copies any tensors. However, the graph can keep references to tensors that would otherwise have gone out of scope: those are referred to as saved tensors.

Why does training a model (typically) requires more memory than evaluating it?¶

Using a torchviz, we can visualize the computation graph 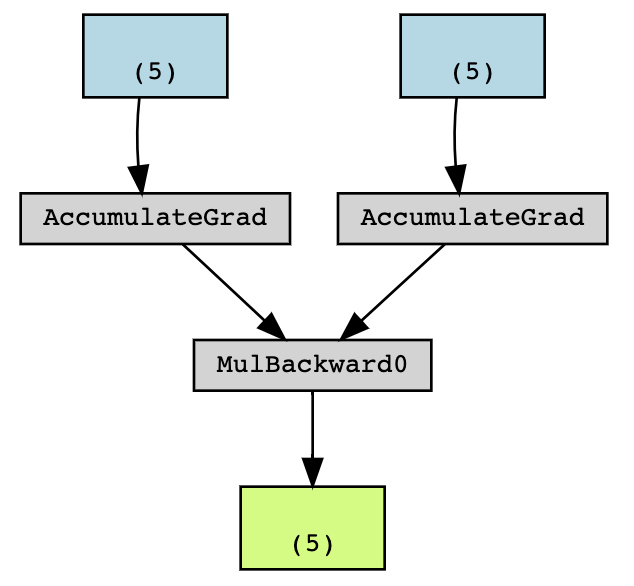 In this example, PyTorch saves intermediary values \(a\) and \(b\) in order to compute the gradient during the backward. 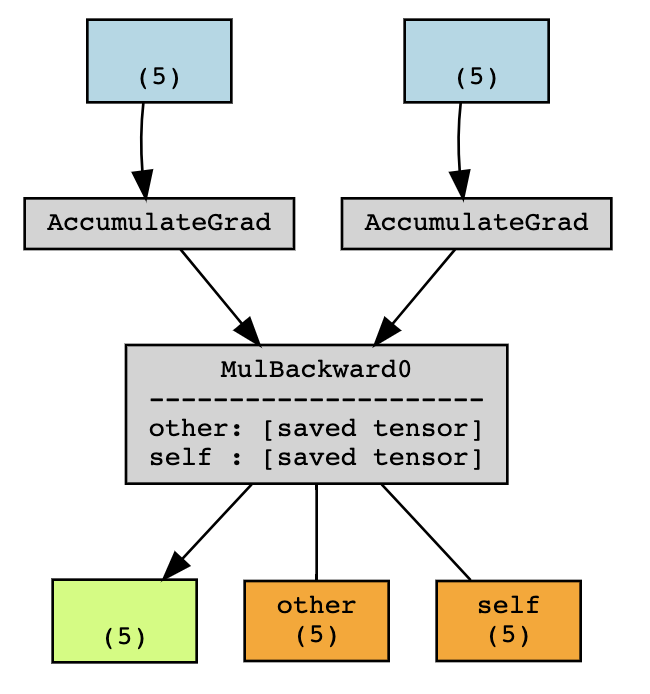 Those intermediary values (in orange above) can be accessed (for debugging purposes) by looking for attributes of the grad_fn of y which start with the prefix _saved:

As the computation graph grows in depth, it will store more saved tensors. Meanwhile, those tensors would have gone out of scope if not for the graph. 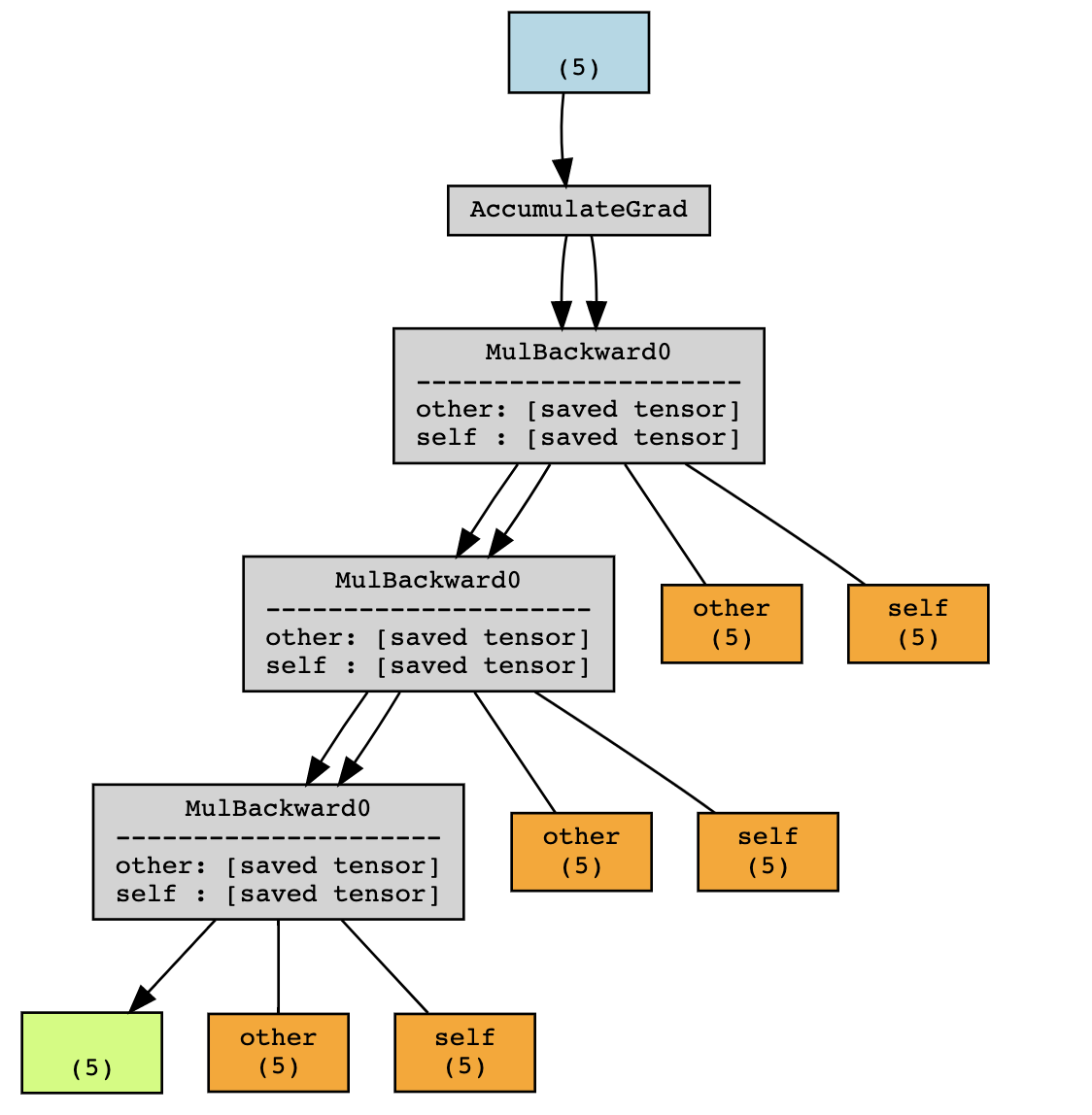 In the example above, executing without grad would only have kept x and y in the scope, But the graph additionnally stores f(x) and f(f(x)). Hence, running a forward pass during training will be more costly in memory usage than during evaluation (more precisely, when autograd is not required).

The concept of packing / unpacking¶

However, that may not always be the case.

Under the hood, PyTorch has packed and unpacked the tensor y to prevent reference cycles.

As a rule of thumb, you should not rely on the fact that accessing the tensor saved for backward will yield the same tensor object as the original tensor. They will however share the same storage.

PyTorch provides an API to control how saved tensors should be packed / unpacked.

The pack_hook function will be called everytime an operation saves a tensor for backward. The output of pack_hook is then stored in the computation graph instead of the original tensor. The unpack_hook uses that return value to compute a new tensor, which is the one actually used during the backward pass. In general, you want unpack_hook(pack_hook(t)) to be equal to t.

One thing to note is that the output of pack_hook can be any Python object, as long as unpack_hook can derive a tensor with the correct value from it.

First, some silly examples to illustrate what is possible but you probably don’t ever want to do it.

Although those examples will not be useful in practice, they illustrate that the output of pack_hook can really be any Python object as long as it contains enough information to retrieve the content of the original tensor. In the next sections, we focus on more useful applications.

Very often, the tensors involved in the computation graph live on GPU. Keeping a reference to those tensors in the graph is what causes most models to run out of GPU memory during training while they would have done fine during evaluation.

Hooks provide a very simple way to implement that.

In fact, PyTorch provides an API to conveniently use those hooks (as well as the ability to use pinned memory).

Of course, you can modulate the tradeoff by only saving to CPU certain parts of the network.

For instance, you could define a special nn.Module that wraps any module and saves its tensors to CPU.

Similarly, you may want to save those tensors to disk. Again, this is achievable with those hooks.

The reason the above code is bad is that we are leaking files on the disk and they are never cleared. Fixing this is not as trivial as it seems.

The reason the above code doesn’t work is that unpack_hook can be called multiple times. If we delete the file during unpacking the first time, it will not be available when the saved tensor is accessed a second time, which will raise an error.

To fix this, we can write a version of those hooks that takes advantage of the fact that PyTorch automatically releases (deletes) the saved data when it is no longer needed.

When we call backward, the output of pack_hook will be deleted, which causes the file to be removed, so we’re no longer leaking the files.

This can then be used in your model, in the following way:

In this last example, we also demonstrate how to filter which tensors should be saved (here, those whose number of elements is greater than 1000) and how to combine this feature with nn.DataParallel.

If you’ve made it this far, congratulations! You now know how to use saved tensor hooks and how they can be useful in a few scenarios to tradeoff memory for compute.