Introducing TorchRec, and other domain library updates in PyTorch 1.11

We are introducing the beta release of TorchRec and a number of improvements to the current PyTorch domain libraries, alongside the PyTorch 1.11 release. These updates demonstrate our focus on developing common and extensible APIs across all domains to make it easier for our community to build ecosystem projects on PyTorch. Highlights include:

We announced TorchRec a few weeks ago and we are excited to release the beta version today. To recap, TorchRec is a PyTorch domain library for Recommendation Systems. This new library provides common sparsity and parallelism primitives, enabling researchers to build state-of-the-art personalization models and deploy them in production. TorchRec was used to train a 1.25 trillion parameter model, pushed to production in January 2022.

In particular, the library includes:

We published a paper, TorchAudio: Building Blocks for Audio and Speech Processing, describing the overview of the TorchAudio library. If you find TorchAudio useful for your research, please help us share with the community by citing our paper.

Also there are prototype features that are available from nightly builds or the main branch.

Collectively, these features cover the full development lifecycle of a streaming ASR model, from definition through training and inference, and enable users to easily develop their own Emformer- and RNN-T-based models.

Special thanks to Yangyang Shi, Jay Mahadeokar, and Gil Keren for their code contributions and guidance.

For more details, please check out the API tutorial and documentation. This prototype feature is available through nightly builds.

TorchAudio started as simple audio I/O APIs that supplement PyTorch. With the recent addition of ASR models and training recipes, the project has received requests to support high-level application development.

Streaming API makes it easy to develop and test the model in online inference. It utilizes ffmpeg under the hood, and enables reading media from online services and hardware devices, decoding media in an incremental manner, and applying filters and preprocessing.

We have added a tutorial to demonstrate SST-2 binary text classification task with pre-trained XLM-R base architecture.

For additional details on model APIs and usage examples, please refer to the documentation.

TorchText has added support for a Byte-Level BPE tokenizer, as used in GPT-2. This tokenizer is also used for tokenizing inputs to the pre-trained RoBERTa models described previously. In addition to the RoBERTa vocab, users can also load their own custom BPE vocab to use the tokenizer. Furthermore, the tokenizer is fully torchscriptable and hence can be employed for production use-cases. For additional details on model APIs and usage examples, please refer to the documentation.

TorchText has modernized its datasets by migrating from older-style Iterable Datasets to TorchData’s DataPipes. TorchData is a library that provides modular/composable primitives, allowing users to load and transform data in performant data pipelines.

Collectively, DataPipes provides a comprehensive experience for data preprocessing and tensorization needs in a pythonic and flexible way for model training. We have added a tutorial to demonstrate data-processing pipelining using the modernized dataset for binary text-classification.

You can learn more about TorchData DataPipe APIs in its official documentation.

Four new model families have been released in the latest version along with pre-trained weights for their variants.

FCOS is a popular, fully convolutional, anchor-free model for object detection. In this release we include a community-contributed model implementation as well as pre-trained weights. The model was trained on COCO train2017 and can be used as follows:

We would like to thank Hu Ye and Zhiqiang Wang for contributing to the model implementation and initial training. This was the first community-contributed model in a long while, and given its success, we decided to use the learnings from this process and create a new model contribution guidelines.

TorchVision now supports optical flow! Optical Flow models try to predict movement in a video: given two consecutive frames, the model predicts where each pixel of the first frame ends up in the second frame. Check out our new tutorial on Optical Flow! 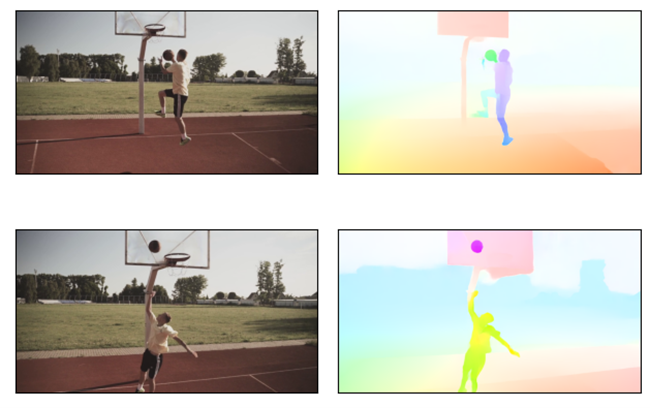 Vision Transformer (ViT) and ConvNeXt are two popular architectures which can be used as image classifiers or as backbones for downstream vision tasks. In this release we include 8 pre-trained weights for their classification variants. The models were trained on ImageNet and can be used as follows:

The accuracies of the pre-trained models obtained on ImageNet val are seen below:

The above models have been trained using an adjusted version of our new training recipe and this allows us to offer models with accuracies significantly higher than the ones on the original papers.

We also support seeking to anyframe or a keyframe in the video before reading, as shown below:

Captum is a PyTorch library for model interpretability. For this release, we expanded Captum with influential instances and added support for both similarity based influences and novel algorithms, TracIn and its variants. TracIn variants offer faster approximation of influence scores based on random projections for fully connected layers.

More about the implementation of influential instances can be found on our GitHub page and tutorials.

Thanks for reading, If you’re interested in these updates and want to join the PyTorch community, we encourage you to join the discussion forums and open GitHub issues. To get the latest news from PyTorch, follow us on Twitter, Medium, YouTube, and LinkedIn.