TL;DR: It can be challenging to run PyTorch on mobile devices, SBCs (Single Board Computers), and IOT devices. When compiled, the PyTorch library is huge and includes dependencies that might not be needed for the on-device use case.

To run a specific set of models on-device, we actually require only a small subset of the features in the PyTorch library. We found that using a PyTorch runtime generated using selective build can achieve up to 90% reduction in binary size (for the CPU and QuantizedCPU backends on an x86-64 build on Linux). In this blog, we share our experience of generating model-specific minimal runtimes using Selective Build and show you how to do the same.

Why is this important for app developers?

Using a PyTorch runtime generated by selective build can reduce the size of AI-powered apps by 30+ MB - a significant reduction for a typical mobile app! Making mobile applications more lightweight has many benefits - they are runnable on a wider variety of devices, consume less cellular data, and can be downloaded and updated faster on user’s devices.

This method can work seamlessly with any existing PyTorch Mobile deployment workflows. All you need to do is replace the general PyTorch runtime library with a runtime customized for the specific models you wish to use in your application. The general steps in this process are:

Building the PyTorch Runtime in a special “instrumentation” mode ( by passing the TRACING_BASED=1 build option) generates an instrumentation build runtime of PyTorch, along with a model_tracer binary. Running a model with this build allows us to trace the parts of PyTorch used by the model. 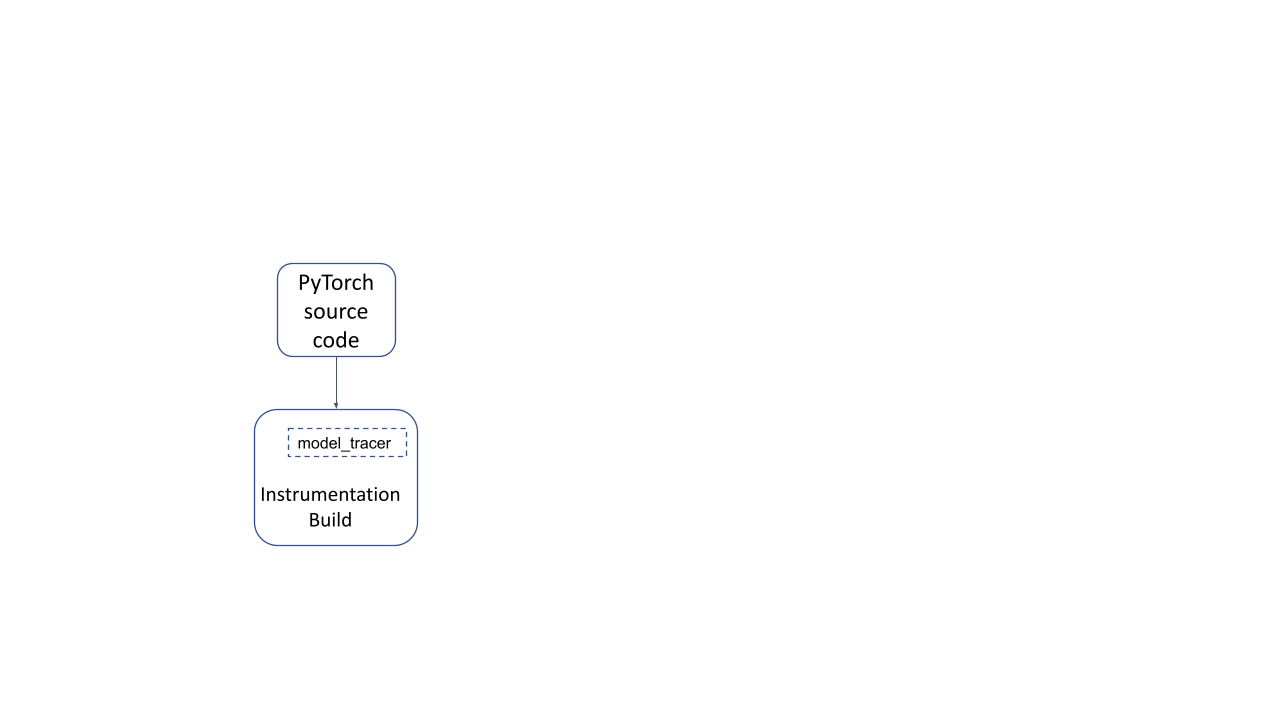 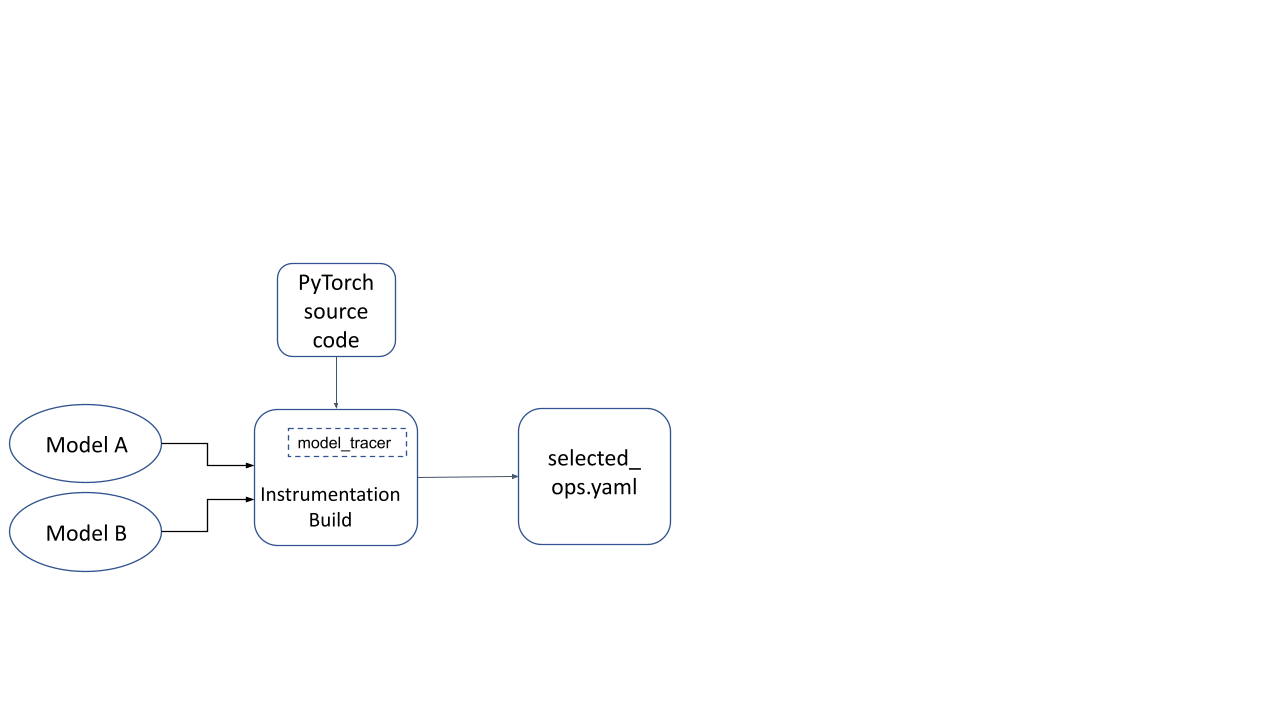 Now we build the PyTorch Runtime again, but this time using the YAML file generated by the tracer. The runtime now only includes those parts that are needed for this model. This is called “Selectively built PyTorch runtime” in the diagram below. 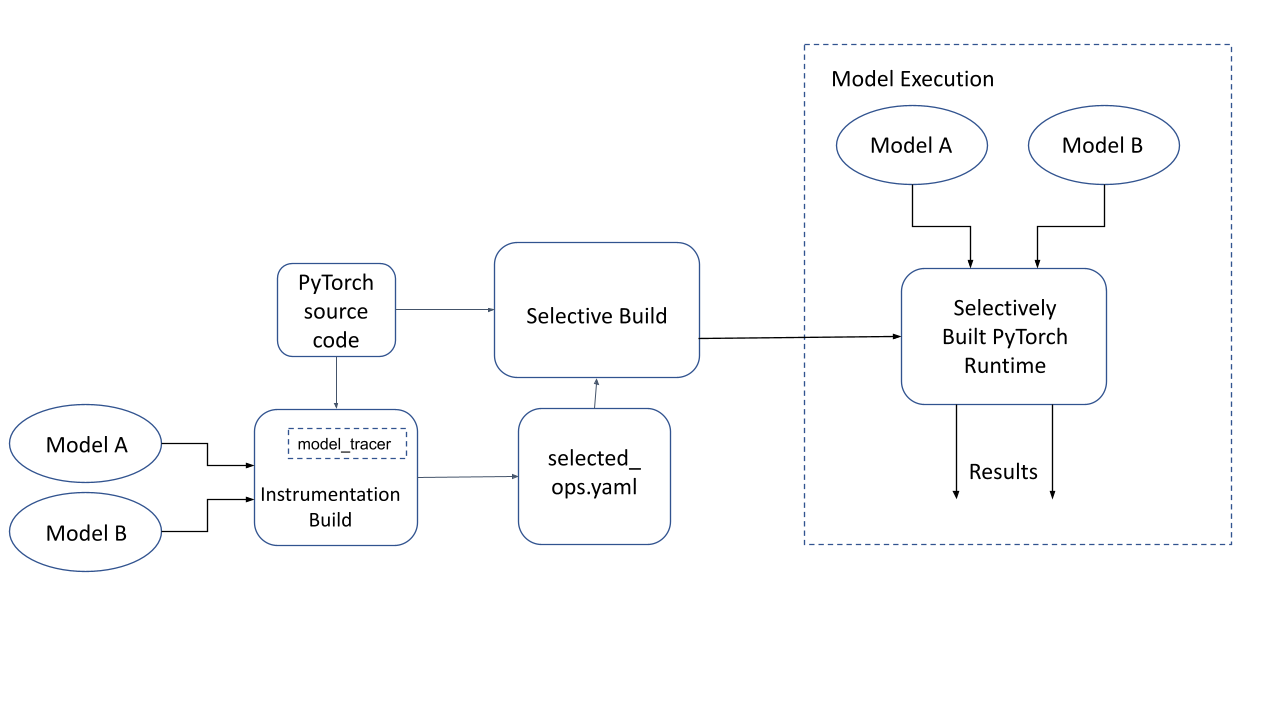 Show me the code!

We’ve put together a notebook to illustrate what the process above looks like in code using a simple PyTorch model.

For a more hands-on tutorial to deploy this on Android/iOS this tutorial should be helpful.

Why is Tracing needed for a Selective Build of PyTorch?

In PyTorch, CPU kernels can call other operators via the PyTorch Dispatcher. Simply including the set of root operators called directly by the model is not sufficient as there might be many more being called under-the-hood transitively. Running the model on representative inputs and observing the actual list of operators called (aka “tracing”) is the most accurate way of determining what parts of PyTorch are used.

Additionally, factors such as which dtypes a kernel should handle are also runtime features that depend on actual input provided to the model. Hence, the tracing mechanism is extremely suitable for this purpose.

Which features can be selected (in or out) by using Tracing Based Selective Build?

The following features can be selected for the PyTorch runtime during the tracing based selective build process:

What is the structure of the YAML file used during the build?

The YAML file generated after tracing looks like the example below. It encodes all the elements of the “selectable” build feature as specified above.

How exactly is code eliminated from the generated binary?

[1] Unreferenced functions removed by the Linker

When a function that isn’t transitively referenced from any visible function is present in the compiled object files that are being linked together, the linker will remove it (if the right build flags are provided). This is leveraged in 2 scenarios by the selective build system.

Kernel Registration in the Dispatcher

If an operator’s kernel isn’t needed, then it isn’t registered with the dispatcher. An unregistered kernel means that the function is unreachable, and it will be removed by the linker.

The general idea here is that a class template specialization is used to select a class that either captures a reference to a function or not (depending on whether it’s used) and the linker can come along and clean out the unreferenced function.

For example, in the code below, there’s no reference to the function “fn2”, so it will be cleaned up by the linker since it’s not referenced anywhere.

[2] Dead Code Eliminated by the Compiler

C++ Compilers can detect dead (unreachable) code by analyzing the code’s control flow statically. For example, if there’s a code-path that comes after an unconditional exception throw, then all the code after it will be marked as dead code and not converted to object code by the compiler. Typically, compilers require the use of the -fdce flag to eliminate dead code.

In the example below, you can see that the C++ code on the left (in the red boxes) doesn’t have any corresponding generated object code on the right.

This property is leveraged in the bodies of PyTorch kernel implementations that have a lot of repeated code to handle multiple dtypes of a Tensor. A dtype is the underlying data-type that the Tensor stores elements of. This can be one of float, double, int64, bool, int8, etc…

Almost every PyTorch CPU kernel uses a macro of the form AT_DISPATCH_ALL_TYPES* that is used to substitute some code specialized for every dtype that the kernel needs to handle. For example:

The macro AT_DISPATCH_ALL_TYPES_AND_COMPLEX_AND3 internally has a switch-case statement that looks like the code in Figure-4 above. The tracing process records the dtypes triggered for the kernel tag “copy_kernel” and the build process processes these tags and inserts throw statements in every case statement that is handling the dtype that isn’t required for this kernel tag.

This is how dtype selectivity is implemented in PyTorch’s Tracing Based Selective Build.

Tracing Based Selective Build is a practical and scalable approach to selecting only the used parts of an application to retain code that static analysis can not detect. This code is usually extremely data/input dependent in nature.

This article provides detailed insights into how Tracing Based Selective Build works under the hood, and the technical details related to its implementation. These techniques can also be applied to other applications and situations that can benefit from reduced binary size.