This blog post is based on PyTorch version 1.8, although it should apply for older versions too, since most of the mechanics have remained constant.

To help understand the concepts explained here, it is recommended that you read the awesome blog post by @ezyang: PyTorch internals if you are not familiar with PyTorch architecture components such as ATen or c10d.

Automatic differentiation relies on a classic calculus formula known as the chain-rule. The chain rule allows us to calculate very complex derivatives by splitting them and recombining them later.

Formally speaking, given a composite function

, we can calculate its derivative as

. This result is what makes automatic differentiation work. By combining the derivatives of the simpler functions that compose a larger one, such as a neural network, it is possible to compute the exact value of the gradient at a given point rather than relying on the numerical approximation, which would require multiple perturbations in the input to obtain a value.

To get the intuition of how the reverse mode works, let’s look at a simple function . Figure 1 shows its computational graph where the inputs x, y in the left, flow through a series of operations to generate the output z.

The automatic differentiation engine will normally execute this graph. It will also extend it to calculate the derivatives of w with respect to the inputs x, y, and the intermediate result v.

The example function can be decomposed in f and g, where and . Every time the engine executes an operation in the graph, the derivative of that operation is added to the graph to be executed later in the backward pass. Note, that the engine knows the derivatives of the basic functions.

In the example above, when multiplying x and y to obtain v, the engine will extend the graph to calculate the partial derivatives of the multiplication by using the multiplication derivative definition that it already knows. and . The resulting extended graph is shown in Figure 2, where the MultDerivative node also calculates the product of the resulting gradients by an input gradient to apply the chain rule; this will be explicitly seen in the following operations. Note that the backward graph (green nodes) will not be executed until all the forward steps are completed. 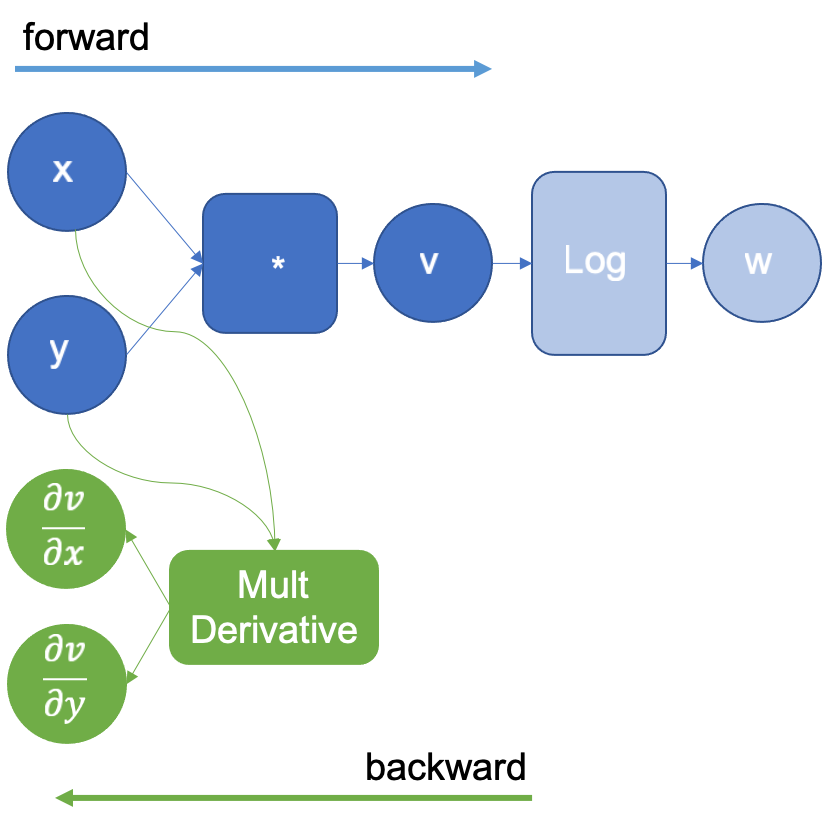 Continuing, the engine now calculates the

. This is shown in figure 3. This operation generates the result

that when propagated backward and multiplied by the multiplication derivative as in the chain rule, generates the derivatives 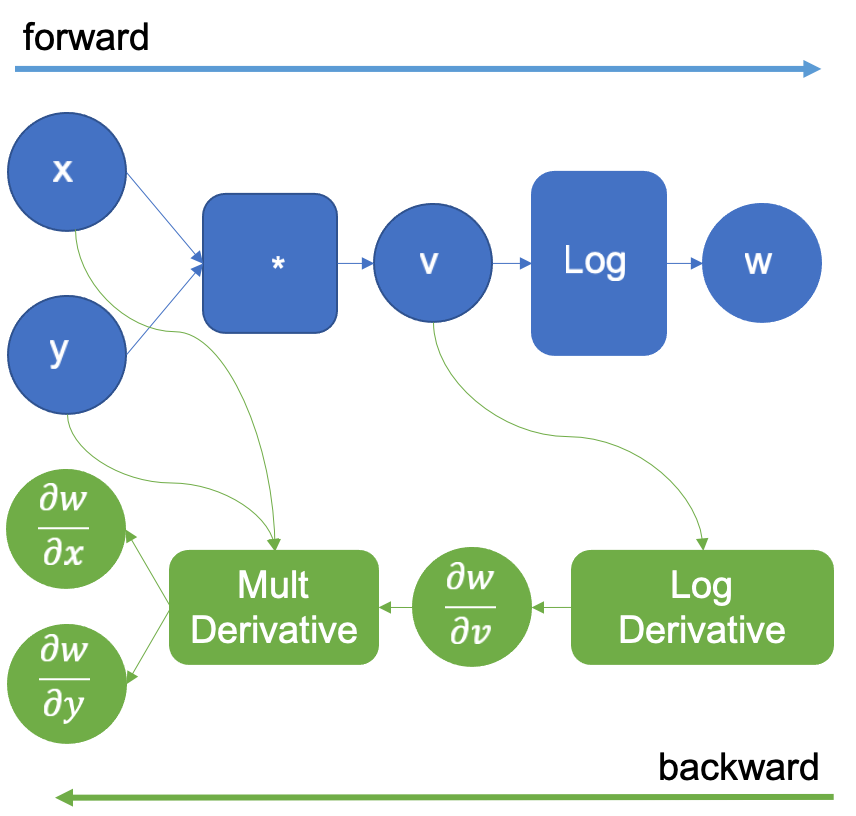 The original computation graph is extended with a new dummy variable z that is the same w. The derivative of z with respect to w is 1 as they are the same variable, this trick allows us to apply the chain rule to calculate the derivatives of the inputs. After the forward pass is complete, we start the backward pass, by supplying the initial value of 1.0 for 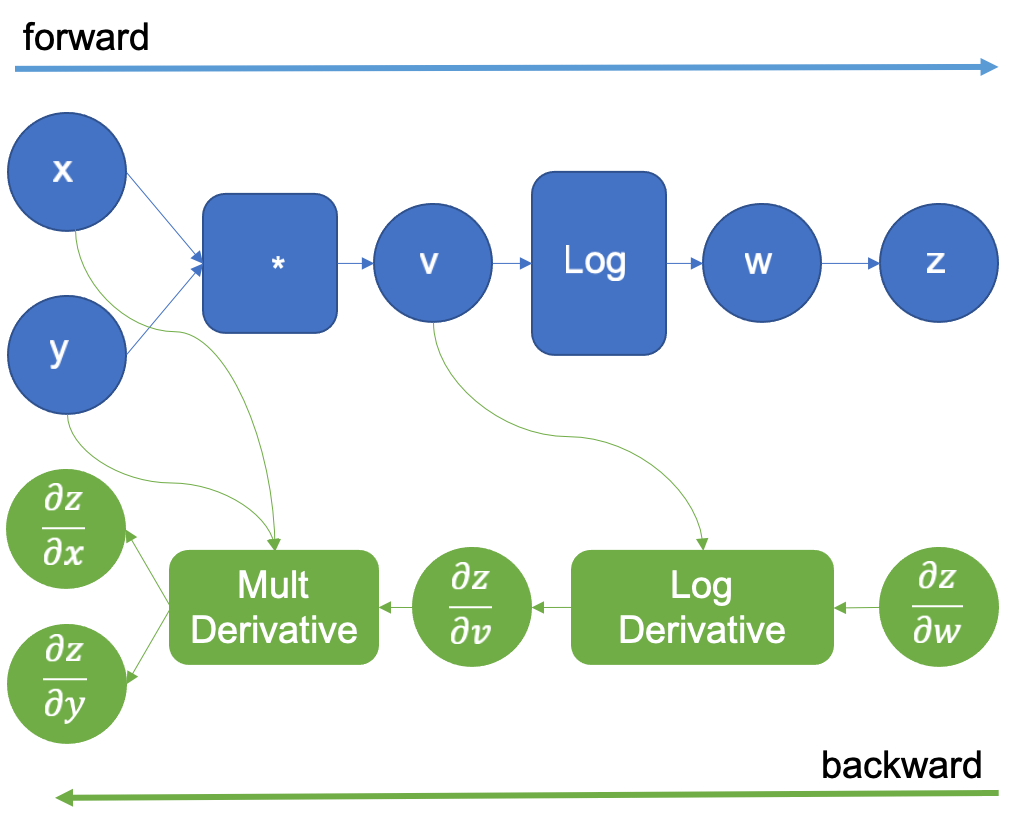 Then following the green graph we execute the LogDerivative operation

that the auto differentiation engine introduced, and multiply its result by

to obtain the gradient

as per the chain rule states. Next, the multiplication derivative is executed in the same way, and the desired derivatives

When we calculate the gradient of a vector-valued function

(a function whose inputs and outputs are vectors), we are essentially constructing a Jacobian matrix .

Thanks to the chain rule, multiplying the Jacobian matrix of a function

with the previously calculated gradients of a scalar function

results in the gradients

of the scalar output with respect to the vector-valued function inputs.

As an example, let’s look at some functions in python notation to show how the chain rule applies.

Now, if we derive this by hand using the chain rule and the definition of the derivatives, we obtain the following set of identities that we can directly plug into the Jacobian matrix of

Next, let’s consider the gradients for the scalar function

If we now calculate the transpose-Jacobian vector product obeying the chain rule, we obtain the following expression:

Evaluating the Jvp for yields the result: We can execute the same expression in PyTorch and calculate the gradient of the input:

Going through the graph

Every time PyTorch executes an operation, the autograd engine constructs the graph to be traversed backward. The reverse mode auto differentiation starts by adding a scalar variable at the end

In PyTorch, the initial gradient is explicitly set by the user when he calls the backward method.

Then, the Jvp calculation starts but it never constructs the matrix. Instead, when PyTorch records the computational graph, the derivatives of the executed forward operations are added (Backward Nodes). Figure 5 shows a backward graph generated by the execution of the functions and seen before. 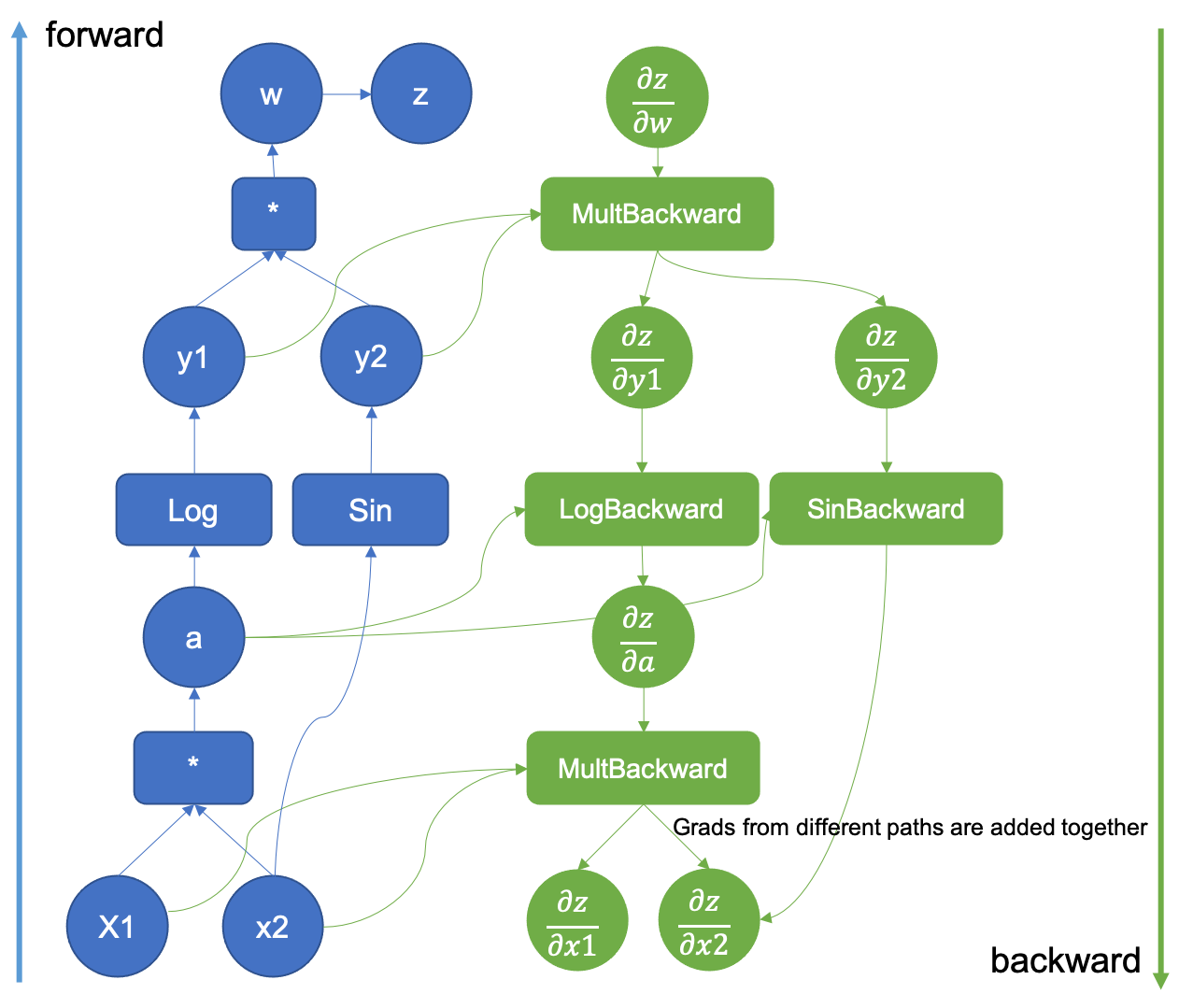 Once the forward pass is done, the results are used in the backward pass where the derivatives in the computational graph are executed. The basic derivatives are stored in the tools/autograd/derivatives.yaml file and they are not regular derivatives but the Jvp versions of them [3]. They take their primitive function inputs and outputs as parameters along with the gradient of the function outputs with respect to the final outputs. By repeatedly multiplying the resulting gradients by the next Jvp derivatives in the graph, the gradients up to the inputs will be generated following the chain rule. 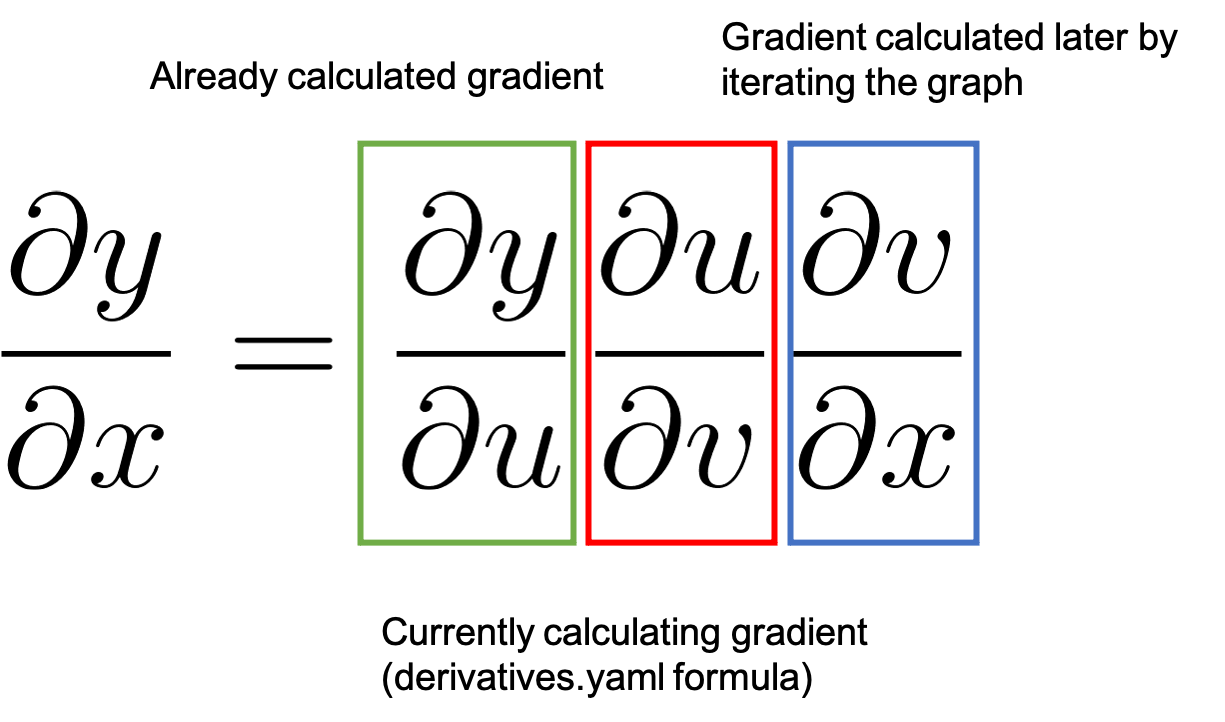 Figure 6: How the chain rule is applied in backward differentiation

Figure 6 represents the process by showing the chain rule. We started with a value of 1.0 as detailed before which is the already calculated gradient

highlighted in green. And we move to the next node in the graph. The backward function registered in derivatives.yaml will calculate the associated

value highlighted in red and multiply it by

. By the chain rule this results in

which will be the already calculated gradient (green) when we process the next backward node in the graph.

You may also have noticed that in Figure 5 there is a gradient generated from two different sources. When two different functions share an input, the gradients with respect to the output are aggregated for that input, and calculations using that gradient can’t proceed unless all the paths have been aggregated together.

Let’s see an example of how the derivatives are stored in PyTorch.

Suppose that we are currently processing the backward propagation of the

function, in the LogBackward node in Figure 2. The derivative of

in derivatives.yaml is specified as grad.div(self.conj()). grad is the already calculated gradient

This code translates to

, the corresponding green, and red squares in Figure 3. Continuing, the autograd engine will execute the next operation; backward of the multiplication. As before, the inputs are the original function’s inputs and the gradient calculated from the

backward step. This step will keep repeating until we reach the gradient with respect to the inputs and the computation will be finished. The gradient of

is only completed once the multiplication and sin gradients are added together. As you can see, we computed the equivalent of the Jvp but without constructing the matrix.

In the next post we will dive inside PyTorch code to see how this graph is constructed and where are the relevant pieces should you want to experiment with it!

Recommended: shows why the backprop is formally expressed with the Jacobian