Microsoft becomes maintainer of the Windows version of PyTorch

Along with the PyTorch 1.6 release, we are excited to announce that Microsoft has expanded its participation in the PyTorch community and will be responsible for the development and maintenance of the PyTorch build for Windows.

According to the latest Stack Overflow developer survey, Windows remains the primary operating system for the developer community (46% Windows vs 28% MacOS). Jiachen Pu initially made a heroic effort to add support for PyTorch on Windows, but due to limited resources, Windows support for PyTorch has lagged behind other platforms. Lack of test coverage resulted in unexpected issues popping up every now and then. Some of the core tutorials, meant for new users to learn and adopt PyTorch, would fail to run. The installation experience was also not as smooth, with the lack of official PyPI support for PyTorch on Windows. Lastly, some of the PyTorch functionality was simply not available on the Windows platform, such as the TorchAudio domain library and distributed training support. To help alleviate this pain, Microsoft is happy to bring its Windows expertise to the table and bring PyTorch on Windows to its best possible self.

In the PyTorch 1.6 release, we have improved the core quality of the Windows build by bringing test coverage up to par with Linux for core PyTorch and its domain libraries and by automating tutorial testing. Thanks to the broader PyTorch community, which contributed TorchAudio support to Windows, we were able to add test coverage to all three domain libraries: TorchVision, TorchText and TorchAudio. In subsequent releases of PyTorch, we will continue improving the Windows experience based on community feedback and requests. So far, the feedback we received from the community points to distributed training support and a better installation experience using pip as the next areas of improvement.

In addition to the native Windows experience, Microsoft released a preview adding GPU compute support to Windows Subsystem for Linux (WSL) 2 distros, with a focus on enabling AI and ML developer workflows. WSL is designed for developers that want to run any Linux based tools directly on Windows. This preview enables valuable scenarios for a variety of frameworks and Python packages that utilize NVIDIA CUDA for acceleration and only support Linux. This means WSL customers using the preview can run native Linux based PyTorch applications on Windows unmodified without the need for a traditional virtual machine or a dual boot setup.

Getting started with PyTorch on Windows

It’s easy to get started with PyTorch on Windows. To install PyTorch using Anaconda with the latest GPU support, run the command below. To install different supported configurations of PyTorch, refer to the installation instructions on pytorch.org.

Once you install PyTorch, learn more by visiting the PyTorch Tutorials and documentation. 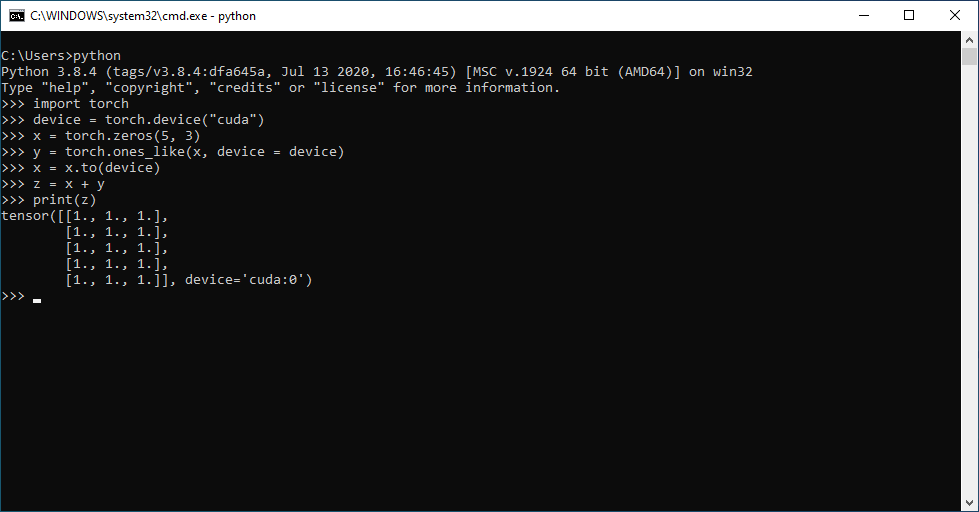 Getting started with PyTorch on Windows Subsystem for Linux

The preview of NVIDIA CUDA support in WSL is now available to Windows Insiders running Build 20150 or higher. In WSL, the command to install PyTorch using Anaconda is the same as the above command for native Windows. If you prefer pip, use the command below.

You can use the same tutorials and documentation inside your WSL environment as on native Windows. This functionality is still in preview so if you run into issues with WSL please share feedback via the WSL GitHub repo or with NVIDIA CUDA support share via NVIDIA’s Community Forum for CUDA on WSL.

If you find gaps in the PyTorch experience on Windows, please let us know on the PyTorch discussion forum or file an issue on GitHub using the #module: windows label.