by Alexander Soare and Francisco Massa

FX based feature extraction is a new TorchVision utility that lets us access intermediate transformations of an input during the forward pass of a PyTorch Module. It does so by symbolically tracing the forward method to produce a graph where each node represents a single operation. Nodes are named in a human-readable manner such that one may easily specify which nodes they want to access.

A Recap On Feature Extraction

We’re all used to the idea of having a deep neural network (DNN) that takes inputs and produces outputs, and we don’t necessarily think of what happens in between. Let’s just consider a ResNet-50 classification model as an example:

Figure 1: ResNet-50 takes an image of a bird and transforms that into the abstract concept "bird". Source: Bird image from ImageNet.

We know though, that there are many sequential “layers” within the ResNet-50 architecture that transform the input step-by-step. In Figure 2 below, we peek under the hood to show the layers within ResNet-50, and we also show the intermediate transformations of the input as it passes through those layers.

Figure 2: ResNet-50 transforms the input image in multiple steps. Conceptually, we may access the intermediate transformation of the image after each one of these steps. Source: Bird image from ImageNet.

To illustrate these, let’s consider a simple convolutional neural network that does the following

Let’s say we want to get the final feature map before global average pooling. We could do the following:

Or return it directly:

That looks pretty easy. But there are some downsides here which all stem from the same underlying issue: that is, modifying the source code is not ideal:

One can see how this downside can start to get a lot more thorny when dealing with larger, more complicated models, and trying to get at features from within nested submodules.

Write a new module using the parameters from the original one

Following on the example from above, say we want to get a feature map from each block. We could write a new module like so:

In fact, this is much like the method that TorchVision used internally to make many of its detection models.

Although this approach solves some of the issues with modifying the source code directly, there are still some major downsides:

Overall, this method and the last both have the complication of tying in feature extraction with the model’s source code itself. Indeed, if we examine the source code for TorchVision models we might suspect that some of the design choices were influenced by the desire to use them in this way for downstream tasks.

Hooks move us away from the paradigm of writing source code, towards one of specifying outputs. Considering our toy CNN example above, and the goal of getting feature maps for each layer, we could use hooks like this:

Now we have full flexibility in terms of accessing nested submodules, and we free ourselves of the responsibilities of fiddling with the source code. But this approach comes with its own downsides:

Here’s a summary of the different methods and their pros/cons:

Table 1: The pros (or cons) of some of the existing methods for feature extraction with PyTorch

In the next section of this article, let’s see how we can get YES across the board.

FX to The Rescue

The natural question for some new-starters in Python and coding at this point might be: “Can’t we just point to a line of code and tell Python or PyTorch that we want the result of that line?” For those who have spent more time coding, the reason this can’t be done is clear: multiple operations can happen in one line of code, whether they are explicitly written there, or they are implicit as sub-operations. Just take this simple module as an example:

The forward method has a single line of code which we can unravel as:

So even if we point at this one line, the question then is: “For which step do we want to extract the output?”.

FX is a core PyTorch toolkit that (oversimplifying) does the unravelling I just mentioned. It does something called “symbolic tracing”, which means the Python code is interpreted and stepped through, operation-by-operation, using some dummy proxy for a real input. Introducing some nomenclature, each step as described above is considered a “node”, and consecutive nodes are connected to one another to form a “graph” (not unlike the common mathematical notion of a graph). Here are the “steps” above translated to this concept of a graph.

Figure 3: Graphical representation of the result of symbolically tracing our example of a simple forward method.

Note that we call this a graph, and not just a set of steps, because it’s possible for the graph to branch off and recombine. Think of the skip connection in a residual block. This would look something like:

Now, TorchVision’s get_graph_node_names function applies FX as described above, and in the process of doing so, tags each node with a human readable name. Let’s try this with our toy CNN model from the previous section:

which will result in:

We can read these node names as hierarchically organised “addresses” for the operations of interest. For example ‘blocks.1.downsample’ refers to the MaxPool2d layer in the second ConvBlock.

create_feature_extractor, which is where all the magic happens, goes a few steps further than get_graph_node_names. It takes desired node names as one of the input arguments, and then uses more FX core functionality to:

As a demonstration, here’s how we would apply create_feature_extractor to get the 4 feature maps from our toy CNN model

It’s as simple as that. When it comes down to it, FX feature extraction is just a way of making it possible to do what some of us would have naively hoped for when we first started programming: “just give me the output of this code (points finger at screen)”*.

Although I would have loved to end the post there, FX does have some of its own limitations which boil down to:

The easiest thing to do when these problems crop up is to bundle the underlying code into a “leaf node”. Recall the example graph from Figure 3? Conceptually, we may agree that the submodule should be treated as a node in itself rather than a set of nodes representing the underlying operations. If we do so, we can redraw the graph as: 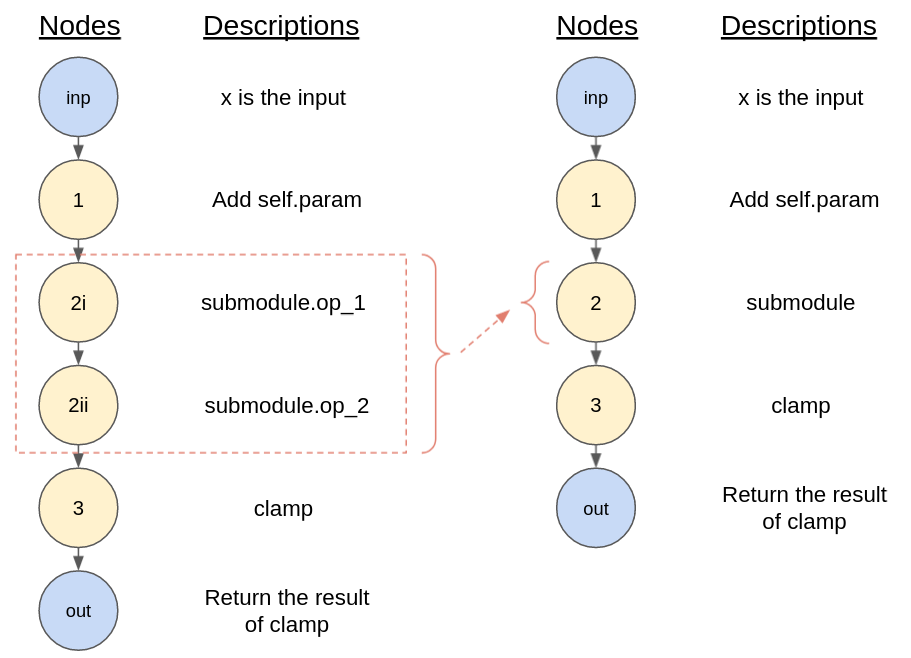 Figure 5: The individual operations within `submodule` may (left - within red box), may be consolidated into one node (right - node #2) if we consider the `submodule` as a "leaf" node.

We would want to do so if there is some problematic code within the submodule, but we don’t have any need for extracting any intermediate transformations from within it. In practice, this is easily achievable by providing a keyword argument to create_feature_extractor or get_graph_node_names.

for which the output will be:

Notice how, as compared to previously, all the nodes for any given ConvBlock are consolidated into a single node.

We could do something similar with functions. For example, Python’s inbuilt len needs to be wrapped and the result should be treated as a leaf node. Here’s how you can do that with core FX functionality:

For functions you define, you may instead use another keyword argument to create_feature_extractor (minor detail: here’s why you might want to do it this way instead):

Notice that none of the fixes above involved modifying source code.

Of course, there may be times when the very intermediate transformation one is trying to get access to is within the same forward method or function that is causing problems. Here, we can’t just treat that module or function as a leaf node, because then we can’t access the intermediate transformations within. In these cases, some rewriting of the source code will be needed. Here are some examples (not exhaustive)

In general, you may consult the FX documentation for more detail on the limitations of symbolic tracing and the possible workarounds.